Anne Trimbach is the13th generation of this long established family operation making Wines at Ribeauville. Anne brings a freshness and energy to this well known, well loved Alsace producer. Professional, knowledgeable and super bright but with a really polite, friendly manner, you can see why Anne has been handed one of only two family members each generation allowed to come into the fold.

The Trimbach origins dating back to 1626 when Jean Trimbach settled in Riquewihr, have through 13 generations grown to the current 47 hectares, producing 1 million bottles each year. 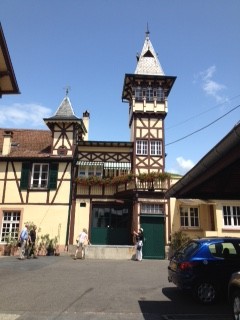 They’ve just acquired a new site and planted Riesling and also Pinot Noir, a variety that Anne is keen to explore further. Oak maturation is mentioned as a possibility for future vintages. Watch this space!

The wine is from the Rotenburg Vineyard – 15 year old vines on limestone and chalk soils.

Produced from the Rosacker Vineyard
50 year old vines on dolomitic limestone
Small production of 8,000 bottles on average
Aged for a minimum of 5 years and  further ageing potential in bottle up to 10 years.
A top quality wine, refined and elegant with a pronounced minerality.

A truly fabulous flight of wines and a very generous tasting from a top Alsace producer.

After we say our goodbyes at around 1 p.m., Anne dashes off to 3 more appointments before her day will come anywhere close to a sit down with a glass of Frederic Emile!