This new wine history began with Kaapse Vonkel 1971. Kaapse Vonkel translates as Cape Sparkle which might easily have become the generic name for South African sparkling wine when others joined Simonsig in producing quality sparkling wine but, in their wisdom, as a group then an Association, they hit on Cap Classique – easier to say, easier to understand and with a real identifiable personality. I’m sure English sparkling wine-makers must harbour a modicum of envy.

Back in 1968 Frans Malan of Simonsig visited Champagne. You may say the rest is history but obviously there’s a bit more to it than that. At the time, no one else was making traditional method sparkling wine in South Africa so there was no one from whom to seek advice; equally there was no one supplying the equipment needed to make sparkling wine so, in forging his own path from grape variety choice to wine-making and ageing, Malan became a true Cape pioneer.

At first he used Chenin Blanc, unsurprisingly, of course, because then it represented 30% of the South African vineyard area and, after all, it works in the Loire for fizz. But there was another reason – there was little access to Chardonnay or other grape varieties he might otherwise have used. Malan created his own makeshift winery complete with homemade riddling pupitres and basically produced a genuinely hand-crafted wine.

Others followed suit, and within a few years there was a group of sparkling wine producers meeting annually to taste base wines, sharing information and experiences. ‘No one had any secrets because they all wanted to learn’ says Pieter Ferreira, Chairman of the Cap Classique Association. And this forward-thinking, open attitude and annual meeting continues today despite there now being over 80 members of the association. The idea of these get-togethers is simple – to help everyone produce their best sparkling wine with the notion that if all the products are good then the category is strong and everyone wins.

1. Not all South Africa fizz is Cap Classique.

2. Only those using the Traditional Method can be labelled and marketed as Cap Classique.

3. Any grapes can be used but, as Pieter says, ‘why reinvent the wheel’ so these days the wines are largely made from of Pinot Noir, Chardonnay and Meunier.

4. Grapes can be sourced from anywhere in South Africa and currently come from 32 different wards.

5. Stellenbosch, Paarl and Roberston are the most important areas for Cap Classique production.

6. 12 months is the minimum ageing sur lattes, a change in 2021 from the 9 months previously set.

7. The styles are the same as other famous sparkling wine producing areas in terms of dosage levels.

8. It is more common for wines to be from a single year rather than be NV (Non-Vintage) and vintage wines do not suggest a higher level quality to NV.

9. It is not unusual for winemakers to ferment in oak.

10. A minimum of 3 bars of pressure is required.

11. Nectar is a category between Sec and Demi-Sec becoming popular in South Africa.

13. UK is the biggest export market with 36% annual growth in the last year.

14. Cap Classique is the fastest growing category in the SA wine industry

Obviously this has to feature because without it we may still be waiting for the quality we have learnt to expect from Cap Classiques. Expressive, citrusy and peachy with a pastry richness and saline acidity. There’s some oak used but no malolactic conversion so there’s a fine balance between balance and structure.

A proportion of barrel-aged Chardonnay and ageing of 48 months have produced a lively, elegant and complex wine which punches well above its price point. As does the Brut NV (available from Waitrose at £14.99) and the special cuvée, Clive. I recommend Graham Beck as a range.

A single vineyard wine and 100% Chardonnay. The wine spent 9 months ageing in barrel before its second fermentation, then 36 months in bottle. It obviously shows some age but it’s bright with a vibrant tension suggesting that this is sparkler for keeping as well as current drinking. 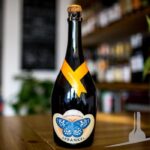 With 54 months on lees you’d expect something pretty rich and creamy which this does indeed deliver. It reminds me of baked apple and caramel, there’s a slight nuttiness, it’s long and complex and, well, just deliciously dreamy.

A predominance of Pinot Noir (80%) with Chardonnay allows a raspberry character to shine through. There’s yeasty, pastry flavours from the extended lees ageing, only having been disgorged in 2019, which sit neatly with the berry notes and silky texture. A joy.

Five more producers to look out for:

In my experience there is real consistency of quality here and most are real value for money. I would never feel the need to apologise to the unconverted that I was serving a Cap Classique where they might have expected Champagne. There’s class in this category, style and a perfect blend of drinkability, complexity and food-friendliness.

You may have noticed a buzz about SA wines in the last year or so, a deserved appreciation of their genuine progressive stride in quality and individuality but I wonder if Cap Classique wines may not have benefitted in the market in the way they should. These sparkling wines are worthy at, and of, any celebration.

And the good news is that they’re not celebrating their 50th anniversary on only one specific day or even a single month this year but for the whole of 2021. This means, if you haven’t worked it out already, that you have an excuse to open a Cap Classique any and every day between now and the end of the year. Chin chin! (or should I say gesonheid!)