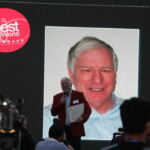 AWE member, Keith Grainger was presented with the award for the Best Wine Education Book 1995-2014 at the Gourmand Awards Ceremony held in Yantai, in China’s Shandong province.

His book ‘Wine Quality, Tasting and Selection’, was first published by Wiley in 2009.  The book, together with ‘Wine Production, Vine to Bottle’ (co-author fellow AWE member Hazel Tattersall) has become a core work for wine courses held in several countries around the world.

A combined new edition of these titles will be published in 2016.  Edouard Cointreau, president of the awards committee, praised Keith’s vast and deep wine knowledge and his great skills as a communicator.  Keith is a founder member of the Association of Wine Educators and committee member of the Circle of Wine Writers. When receiving the award he stated he accepted it on behalf of all the wine educators, writers and wine makers around the world whose efforts make the world of wine so exciting.