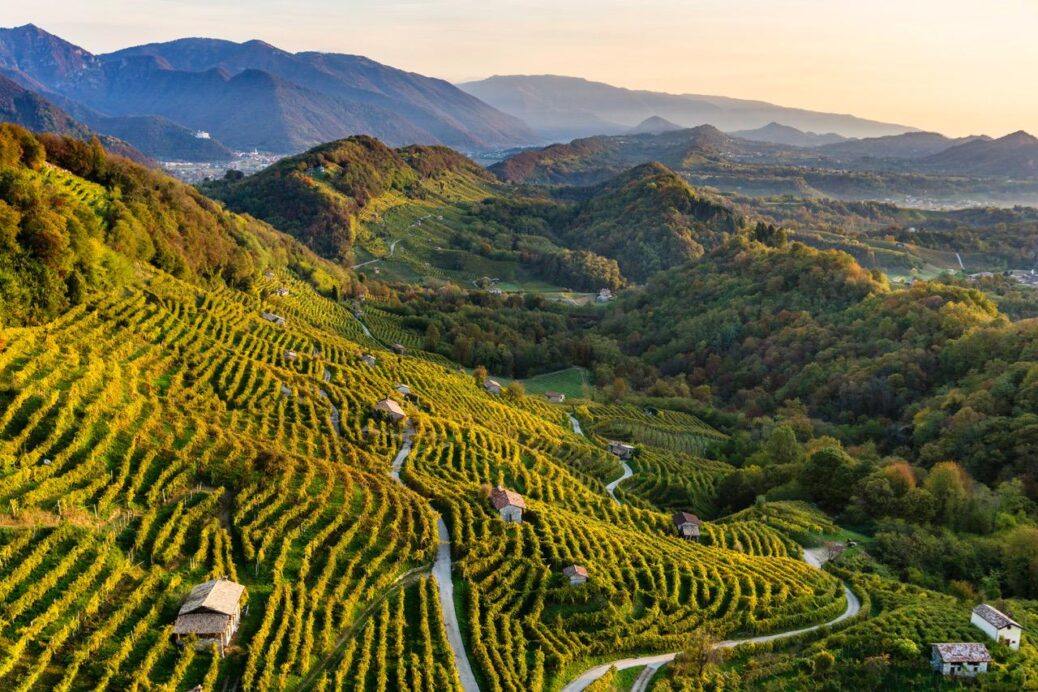 NB – This feature was originally written for a consumer publication, hence it does not delve into the finer aspects of Conegliano Valdobbiadene.

Prosecco is one of the great success stories of the Italian wine industry, and with around 125m bottles of Prosecco DOC exported to the UK in the last year, it has taken the market by storm like no other wine.  (source: GlassofBubbly.com, May 2022).

But not all Prosecco is born the same. Whilst Prosecco DOC is produced in the area between Venice and the Dolomites, there is another Prosecco which is increasingly capturing the public’s imagination for its finesse, and it’s often referred to as Prosecco Superiore DOCG.   To give it its full name, it’s the tongue-twisting Conegliano Valdobbiadene Prosecco Superiore DOCG. This is the highest quality of Prosecco and comes from heart of this area, where the vines are grown on steep slopes and are tended by hand in the traditional way. Although ‘only’ about 9m bottles are currently exported to the UK, the volume and value of the Prosecco Superiore DOCG sector is growing fast – without forgetting that it was established only 13 years ago, whilst Prosecco DOC was established 53 years ago.  Whilst Prosecco DOC will always be much loved and easily available in most retail outlets, the focus of the UK consumer is shifting towards the more premium and food styles of Prosecco – from the Conegliano Valdobbiadene Prosecco DOCG area. So common in the restaurants of Venice, this Prosecco is now increasingly found in the finer restaurants and bars in the UK, and it deserves our attention.

Altitude, and therefore better day-night temperature difference, poorer soils which makes the vine roots work harder, and steep slopes which afford better exposure to the sun, produce finer, more delicately nuanced wines than those made on the plains below the Conegliano Valdobbiadene area.

To learn and appreciate the style of Superiore, the Director of Consorzio Conegliano Valdobbiadene Prosecco DOCG  Diego Tomasi came to London to present a whole range of wines from this area. Together with Sarah Abbott MW (master of wine), the UK consultant to the DOCG, they showed during a tasting of Prosecco Superiore Rive and Cartizze what this Prosecco is all about.

First of all, it comes from the green, vertiginous hillsides of Conegliano Valdobbiadene, 50 km north of Venice. Conegliano Valdobbiadene, known as the birthplace of Prosecco, covers 8,000 hectares and consists of 15 communes, representing the heart of the world of Prosecco.  There are also 43 Rive, which, in the local dialect, means the very steep hillsides characteristic of the area.  Rive wines are produced exclusively from grapes grown in a single commune or hamlet, so as to highlight the qualities that the terroir confers on the wine.

From the vine to the glass

Conegliano Valdobbiadene Prosecco is obtained from a combination of grape varieties that have been grown locally for centuries, of which the principal one is Glera, which constitutes at least 85% of the blend. The bunches are rustic and vigorous, with hazelnut coloured shoots, and loosely packed. The grapes are an attractive golden yellow, immersed in the bright green of the leaves.

The production method is a reworked version of the Italian Method, also known as Martinotti or Charmat, which allows the producer to maintain intact the wine’s freshness and liveliness, as well as those aromatic qualities which are the natural characteristics of Prosecco Superiore DOCG.  This means that the wine undergoes a natural re-fermentation in pressurized containers. The result is based on perfect control of the time employed, usually no longer than four weeks. This allows the producer to maintain intact the fragrance, freshness and balance between acidity and sugars that characterize Prosecco Superiore.  All of the perfume of the grape are, therefore, found once again in the wine.

There are different styles, starting with Extra Brut, which is the most contemporary version in line with worldwide trends for an increasingly dry taste, crisp and elegant, dry but intense, with the least residual amount of sugar. Brut, in harmony with modern tastes with fragrances rich in citrusy aromas and green notes, combined with an appealing vibrancy on the palate.  Extra Dry, the most traditional style, usually bright straw in colour enlivened by a fine perlage, and a tanginess on the palate. And Dry, the oldest and today the least common style, which highlights the wine’s fruity and flora aromas, delicate fruity fragrance like white peaches and green apples.  This is ideal with food, such as dry pastries or spicy Asian dishes, as despite the name ‘dry’, it’s the style with the most residual amount of sugar.

A special highlight was the Prosecco DOCG from Cartizze, a Prosecco in a class of its own, from a subzone in Conegliano Valdobbiadene made up of only 107 hectares. The vines here are over 40 years old, grown on just one hill.  Cartizze is considered the outstanding pinnacle of the Denomination’s quality. A perfect combination of microclimate and very ancient soils, made up of moraines, sandstones and clays, give the wine its unique characteristics. This is a sumptuous sparkling wine. We tasted Colesel Cartizze DOCG Dry, straw yellow, with fine and persistent bubbles. A creamy foam, an intricate floral aroma and fruity notes of green apple and pear. Charismatic, dry and intense.

And so we raised another glass.