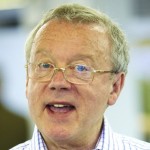 Honorary President
"He is authoritative and witty and pitches it just right. He even rounds off proceedings by bursting into song" Jonathan Ray, Daily Telegraph
Twitter
AWE Member

Charles Metcalfe is one of the best-known, most spontaneous and amusing wine critics in Britain. He presented drinks and occasionally food items for 12 years as one of the Richard-and-Judy team on the ITV programme, ‘This Morning’, was the drinks expert for ‘Taste Today’, and a wine presenter on ‘Great Food Live’ He also presented many wine and food programmes on the Granada Breeze satellite channel.

He is co-chairman of the International Wine Challenge, the world’s best wine competition, held annually in London, and was one of the founders of Wine INTERNATIONAL magazine. Now he will talk to anybody and everybody about wine, from vast corporations to local wine societies and small dinner parties.

You can read Charles regularly in ‘Wine – a Essência do Vinho’ (if you speak Portuguese!), and occasionally in ‘World of Fine Wine’ magazine and the Telegraph. Charles and his wife, Kathryn McWhirter, together published a book about Portuguese wines, food and places to visit, ‘The Wine & Food Lover’s Guide to Portugal’, which won the 2008 Louis Roederer International Wine Book of the Year award. ‘The Wines of Spain & Portugal’, again co-authored with Kathryn, won the 1989 Glenfiddich Drinks Book of the Year award.

Their ‘Sainsbury’s Pocket Food & Wine Guide’, a guide to which wines to drink with which food, was published in October 1995. Charles also acts as a consultant for restaurant wine lists, and is one of two wine consultants to the Corporation of London, selecting wines for their State Banquets and other dinners. He is proud to serve as Honorary President of the Association of Wine Educators and Chairman of Judges for the Louis Roederer International Wine Writers’ Awards (only since 2009, since you ask!). He often tastes (and spits out, of course) 100 or more wines per day, all over the world.