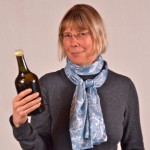 Full Member
“Wink has presented to my local wine society over a number of years. She is an excellent and popular speaker with a great knowledge of her subject who always draws a full house.” MC – Solicitor, Chichester, UK
Twitter
LinkedIn
Facebook
AWE Member

Wink is a wine educator, writer and editor with over 30 years experience in the wine world. She has written and self-published two highly acclaimed books. Wines of the French Alps: Savoie, Bugey and beyond was published in 2019 and Jura Wine in 2014. The latter won the André Simon Food and Drink Award for Best Wine Book 2014 and was shortlisted for Best International Wine Book in the Louis Roederer Wine Writers Awards 2014.

As an educator, Wink’s best skill is in presenting entertaining and educational wine events with well-chosen wine selections always an important feature. She will design and present wine tasting events for corporate and social groups, wine clubs, or indeed for an informal house party anywhere in the UK or within easy reach of her second base in eastern France, one hour from Geneva.

A founder member and first Chairman of AWE, as well as previous editor of AWE Inspiring News, Wink believes passionately in educating about wine in an entertaining, informative and professional way. She lectured for the WSET Diploma Course over several years on various subjects including the Loire, sparkling wines, North & South America and on South Africa. Today she runs consumer, trade and corporate seminars and tasting events focussing mainly on the regions covered by her two books.

Wink is known for her enthusiastic wine tasting presentations and offers a wry, down-to-earth viewpoint. Over the years she has accumulated a wealth of amusing, personal stories during her travels through wine regions. She particularly enjoys sharing her experiences from South America and has visited Chile, Argentina, Uruguay and Brazil several times.

Wink wrote the Jura & Savoie chapter for Tom Stevenson’s Wine Report and has contributed on Jura and Savoie to many wine books including Jancis Robinson’s Oxford Wine Companion, The Wine Opus and Neil Becketts’s 1001 Wines You Must Try Before You Die. She has also contributed to Le Cordon-Bleu Wine Essentials, The Global Encyclopaedia of Wine and Time-Life’s Wine Guide as well as writing articles for World of Fine Wine Magazine, Decanter, Drinks Business, Harpers Magazine, Oenologie and many more. Wink was acting editor for Wine-Searcher’s magazine in 2014/15 and still contributes to the magazine regularly. She was editor of the journal of the Circle of Wine Writers from 2015-17.