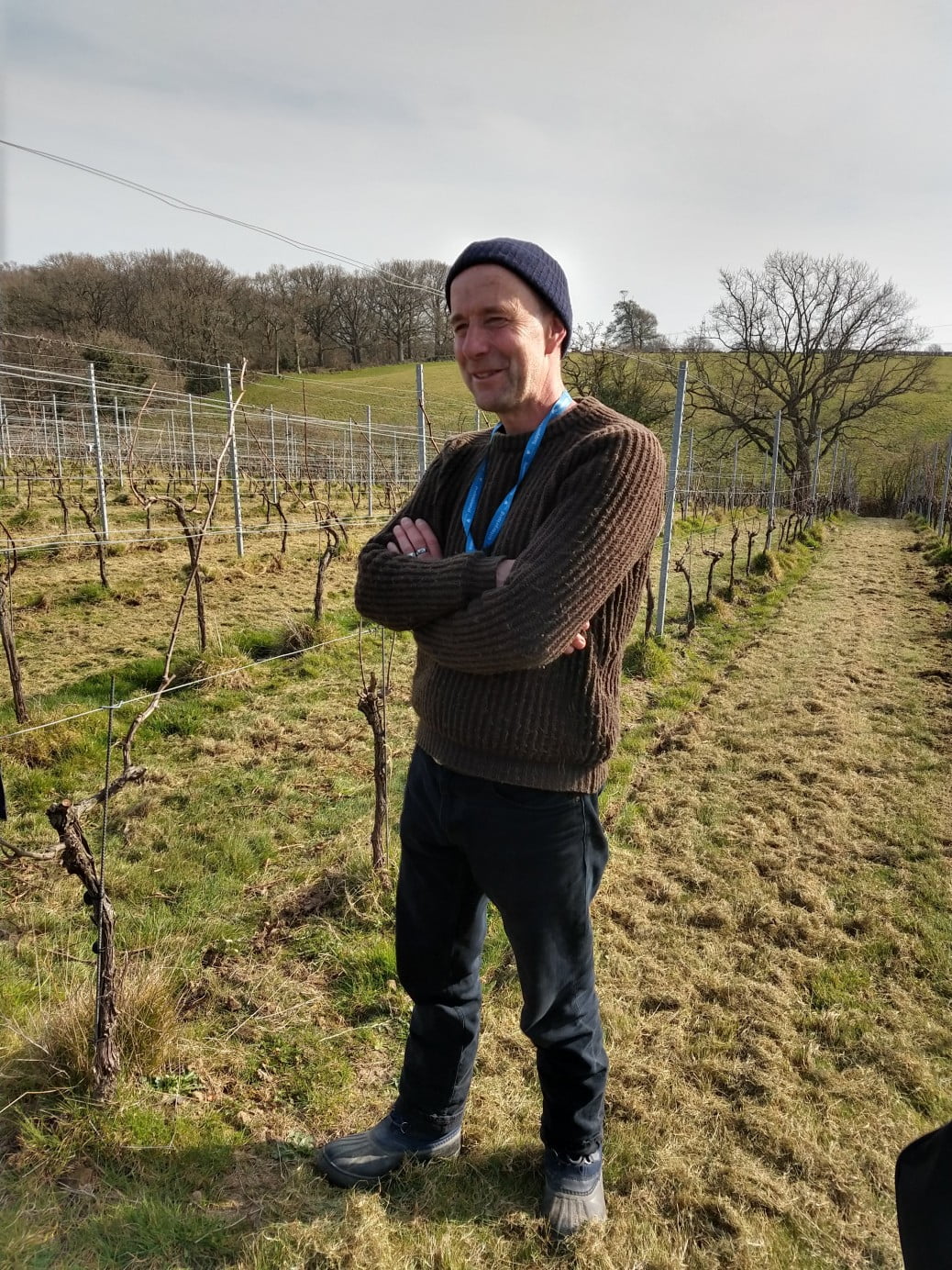 Some of you may say I know all about Piwis, others may say I know nothing, “What’s a Piwi?” I was somewhere in between. Yesterday on my trip to Plumpton with the AWE I got some more information which I thought would be good to share. A Piwi, what is it? Well it’s a hybrid. A crossing between a Vitis Vinifera vine and a something else Vitis vine. It’s fair to say that most of us in the trade have mixed feelings or should I say negative feelings about the “something else” Vitis vine and that wine has to be made from Vitis Vinifera to be of decent quality, so why have we crossed Vitis vinifera with something else? The main reason, disease.

Plumpton agricultural college in East Sussex  is one of the many places in the world where they are experimenting with several different hybrids to see what could be achieved by the crossings. Tom Newham (pictured above) the vineyard instructor at Plumpton explained to us how for many years Plumpton has not used copper in the vineyard as is increasingly the case with many vineyards around the world. So how can we combat Downy Mildew? Piwis! Is this the answer? Historically when we talk about Piwis we remember the often terrible wines which were produced around the world during the 50’s 60’s, it understandably makes us cautious, reluctant even to go down that route again. One thing that Tom told us was that these Piwis are produced from natural cross pollination all be it in a sterile environment, but perhaps most importantly, not from genetically modified stock. Examples of the crossings might include Cabernet Noir or Cabernet Blanc, crossings between Cabernet Sauvignon and a non vinifera vine. What these Vitis vines are we don’t know. Being kept quiet, secret recipes maybe. Let’s face it if after a huge amount of research, if you find one that works really well you probably don’t want to release the recipe just yet.

Plumpton has 21 different Piwi varieties.  Research is going on all around the world. Already several wine regions have shown interest in some of the Piwis produced. Legislation at the moment in most areas forbids the use of these in IGP wines, but things surely are going to change. If the results eventually show quality similar or even better to those that we see from Vitis Vinifera today why wouldn’t you plant it? Well why would you plant it, what’s the benefit? The answer: disease. Pesticide use per hectare in viticulture is by far the highest compared to all other agricultural products produced in the EU. One of the results that Tom told us about was the extraordinary effect that it had on the mildews, basically there were none! No spraying needed, and spraying is expensive and bad for the environment. The result, higher quality grapes, more even ripening so again why wouldn’t you do it?

It’s early days, it will be very interesting over the next few years to see how the Piwis develop. At the moment Tom suggested these would initially be used for bulk wine production, but with more research, more development, who knows. Remember the American root stock? When this was introduced can you imagine the chat back then? I’m sure there was great contention to the idea of introducing an American root stock to the great European vine and the effect that would have on quality and character. We got used to it, we accepted it and over time we learnt how to get the most out of it. Is that the way we are heading now? I suspect so. I’ll remind my grand children of this blog post.

By the way If anyone wants to know what Piwi stands for it is Pilzwiderstandsfähig – which essentially means fungal resistant. (yes and it also means some kind of Porsche management system).