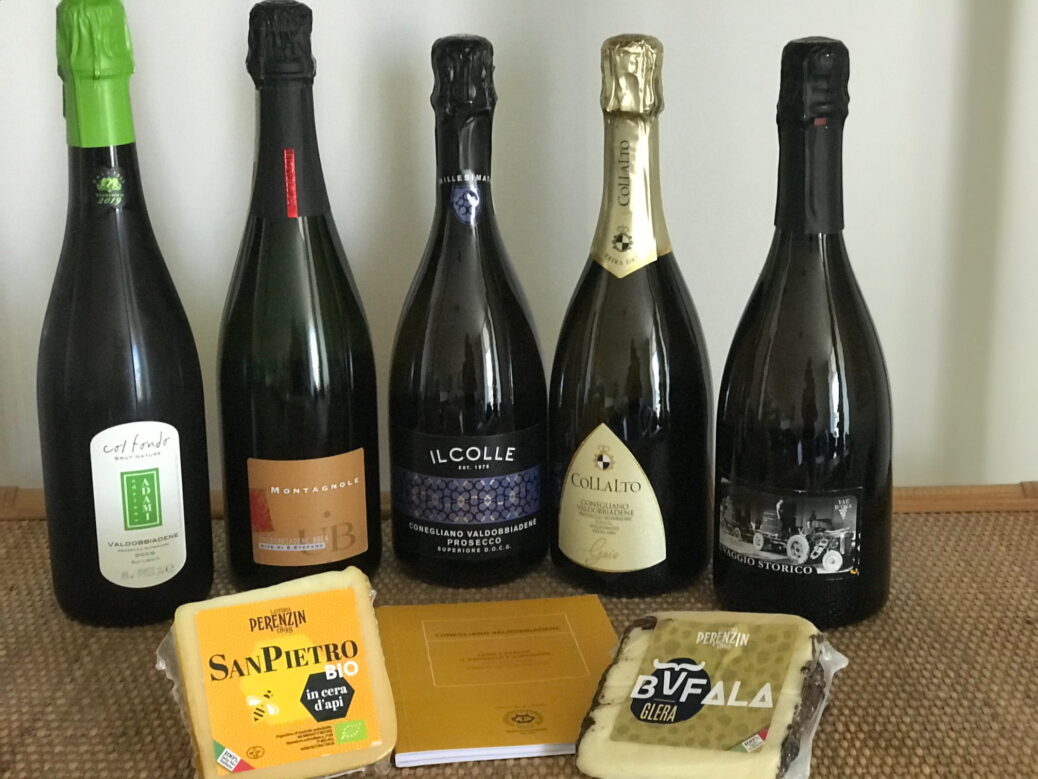 The virtual trip to Conegliano Valdobbiadene Prosecco Superiore DOCG wine area offered so much to the group of AWE participants – live streams from the vineyards, watching those incredibly steep slopes, conversations with the experts, tastings with the producers and first class back up material.

But there was a further surprise on the second day, when we were able to taste two of the most typical cheeses from this very special area, kindly supplied by Perenzin Latteria SRL.

We were challenged to pair and contrast the cheeses with the range of prosecco superiore we were tasting, and an online poll revealed some interesting scores.

The first cheese was  San Pietro in Cera D’Api Bio – an organic cow’s milk cheese covered in a layer of equally organic beeswax, which keeps the  humidity within the paste at the optimum level, so that the texture remains silky. This is something unusual for an aged cheese like this, and not surprisingly, we were told that it won several awards. This smooth, light straw yellow cheese, with a persistent beeswax scent,  was salty and slightly sweet at the same time. A slight honey overtone lessened the spicy hints of this aged cheese.

Almost unanimously, it was felt that the Extra Dry style was the perfect match. On this occasion, we were tasting Collalto Conegliano Valdobbiadene Prosecco Superiore DOCG Millesimato 2020, which  Sarah Abbott MW said was a really good example of why Prosecco is so popular.  This fruity, intense, crispy-creamy prosecco superiore with very fine bubbles, and ripe apple and acacia flavours,  seemed to cut through the richness of the San Pietro in a very elegant way.

The second cheese was Buffalo’s Drunken Caciottona, a buffalo milk cheese ‘drunken’ with Glera grapes. Based on the old custom of hiding cheese in fermenting grape must or marc to conceal it, this method also led to better preservation of the cheese itself. These days, the cheese is stepped in marc for 10-15 days. Its wrinkled crust with the residue of crushed grapes is light brown, whilst inside this semi-hard cheese displays a white paste, sapid and sweet, with an intense wine cellar aroma.

The prosecco superiore style which best matched this cheese was the Extra Brut, and we tasted Bortolotti  Valdobbiadene Prosecco Superiore DOCG  Extra Brut Rive di S. Stefano 2019 ‘Vigna Montagnole’, a wine with a floral, honeysuckle expression, beautifully balanced with very low residual sugar. A very elegant wine which complemented the special characteristics of the buffalo cheese.  However, hot on the heels of this one, followed a well-liked pairing with Il Colle’s Brut Millesimato 2020 – creamy and aromatic, it provided a contrast to the  buffalo cheese, and its typical glera grape flavour enhanced the flavour of the cheese rind (for those who tasted it – I did!! – why waste anything so good?)